What Is Reactive Marketing?

Reactive marketing. One of the most popular buzzwords in marketing at the moment, but what does it actually mean? It’s essentially the opposite of proactive marketing – instead of anticipating changes in consumer behaviour, you respond to them. Rather than the focus being on coming up with new ideas and anticipating what your customers will want in the future, reactive marketing addresses changes that are happening right now. That could be trends, current affairs, market changes or a variety of different influential factors.

Back in June of this year, footballer Cristiano Ronaldo made headlines when he replaced a bottle of Coca Cola with water during a press conference. Although it caused Coca Cola’s PR team a massive headache, IKEA were quick to make the most of the situation. They released this marketing campaign for the “Cristiano” glass bottle, specifying that it’s a reusable bottle “for water only”, supporting Ronaldo’s aversion towards fizzy, high-sugar drinks. To make sure the inspiration didn’t go unnoticed, IKEA used the hashtag Euro2020 on social media, as well as tagging Ronaldo himself. It’s no surprise that the campaign got a lot of attention.

KFC made headlines in 2018 when they famously ran out of chicken, causing them to close many of their restaurants until the issue was fixed. As a chicken restaurant, running out of chicken may be the worst scenario imaginable. However, in the PR turnaround of the year, KFC published this reactive marketing campaign. The ad showed the 3 letters of their brand rearranged, on an empty chicken bucket. It said it all in 3 little letters. The perfect comedic response to an otherwise disastrous situation.

When speaking about brands with brilliant marketing campaigns, it’s hard to ignore Innocent. They’re known to always jump on trends and keep up to date with current affairs, but this example in particular is one of our personal favourites. Although it’s not a marketing campaign, this tweet made waves back in April. Following the reopening of the pubs in England after lockdown, Innocent tweeted out as though they were drunk. They showed their personality and iconic sense of humour, in one simple tweet. 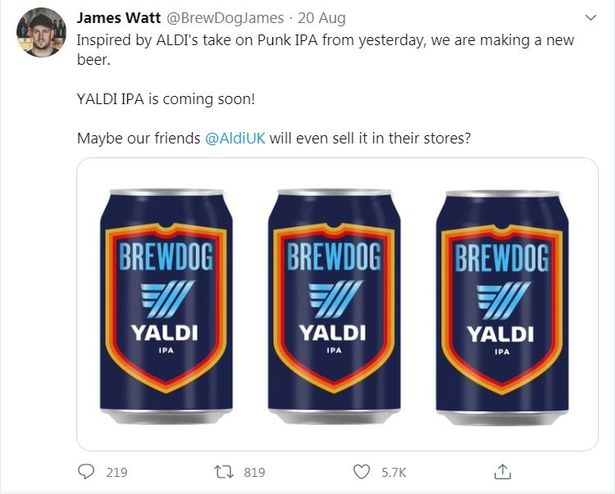 This next campaign started with a striking resemblance of one of Brewdog’s most famous beers, Punk IPA. The brand’s owner noticed ALDI’s new “Anti Establishment IPA”, drew one too many comparisons and responded with a fantastically creative campaign. He mocked up a new, ALDI branded beer called “YALDI IPA” and asked if ALDI wanted to stock it. It was a fun, tongue-in-cheek response to an alleged copycat which even resulted in ALDI stocking the beer, slightly rebranded as “ALD IPA”.

Last but not least, KitKat. Now this one is a little bit different as it was part of the @OneMinuteBriefs Twitter challenge, but we love how creative and reactive it is. The ad shows a KitKat covering a couple of slots in a diary, breaking up an excessive amount of Zoom calls. In this Work From Home age due to the pandemic, a lot of people will be all too familiar with this exact scenario. It’s using KitKat’s iconic slogan, “have a break, have a KitKat”, in a reactive way, relating to the UK’s lockdown.

Responding to trending topics, news and maybe even TV shows can make a brand come across as more relevant and relatable. The content may even receive more impressions than usual, given that a lot of people will already be engaged with or aware of the topic. We absolutely love these 5 campaigns for their creativity. It’s time to get reactive with your brand’s marketing efforts. Find out how TikTok & Instagram are two of the perfect platforms to nail reactive marketing.

What Is Black Fiveday and How Can Your Business Get Involved?

You’ve been hearing all about it on LinkedIn, you’ve started to receive countdown emails and your social feeds are full of sale banners. But what

Colour Theory: The Role Of Colour In Marketing

Ready to get started?